I went to Bunnings this week to buy plants, but got side tracked by the paint aisle. I've been looking at paint swatches for several months, trying to figure out a colour for the exterior of our house. At the moment the first level is painted black and the second level is white with black trim on one side, brown trim on the other sides (where the trim hasn't been painted since the house was first built).

I like the look of the black and white, but our north-facing house gets all-day sun so the black makes it way too hot. On a sunny afternoon, opening my kitchen cupboards feels like opening an oven, since they back onto a black painted wall (and I'm guessing there's no insulation in the walls).

I've always liked olive/sage colour schemes on houses because they settle well into their environment, so that's the colour I've had in mind for the past few months.

I was still in the thinking-about-it stage and wasn't expecting to start painting now, but earlier this week our neighbours cut down all the trees that lined their side of our fence. The trees were providing some shade, but with them gone I'm doubly aware that we're going to cook this summer in a black house.

Most of the trees were privet, so I was glad to see them go because I spend far too much time weeding tiny privet seedlings out of my garden, but I will miss the shade and privacy they provided. On a positive note, with the trees gone our house is way more open to the house next door, so my kids have all of a sudden made friends with the girls who live there. 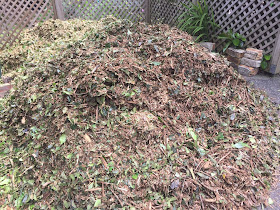 Also, I got a truck load of mulch from the trees that got cut down, and I've been scooping that onto my garden. I didn't care that it was mostly privet mulch, since I've already got privet seedlings coming up, and this mulch will cover the already-sprouted seedlings and kill them. Even if more seedlings sprout, I'll still come out ahead because mulch is so good for the garden.

Back to the paint. I bought 2 x 15 litre buckets of Terrace Stone, which is a very pale creamy gray-green colour I had been attracted to in the swatches. I was nervous about ending up with something too minty, but this is definitely not that. It might be a bit lighter and more creamy than I was anticipating, now that I've got some of it on the walls, but I'm still enjoying it.

I decided to hit spend on the paint because it was being sold at a really good deal since the range I chose is being discontinued. Each 15 litre bucket was only $99 and I'm confident I'll be able to paint the entire house with what I bought and still have plenty left over for touch ups.
My goal is to paint all the exterior walls Terrace Stone and the trims and battens black. The tricky thing is working out how to access level two of our house as scaffolding is ridiculously expensive and we don't have the funds for it. I'm working on different options though. I've made contact with a local woman who rents out scaffolding at a way cheaper price than anywhere else. Unfortunately we would need to set it up ourselves and with Paul's shoulder being out of action, I wouldn't have him to help me.

I'm quite keen on using a cherry picker to access the front of the house, since it has factors which would make scaffolding awkward. However, I'd first need to get a tow ball installed on our car so we can bring the cherry picker home from the hire centre. So that's another cost that will add to the overall price of doing this. I'm seriously wishing for a hoverboard, because painting is so easy when access isn't an issue.
I've spent the last couple of afternoons painting and have already made good progress on the house. I've almost finished two sides of the ground story. The weather is looking a bit iffy today, so I'm not sure whether I'll be able to paint the back of the house or not. I don't want to paint, only to have the rain wash it all away. (Yep, it just started raining.) 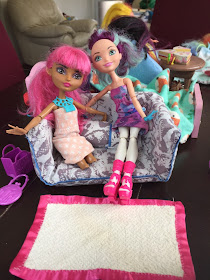 In other frugal fun news, L sewed two dolls dresses this week. She used old pants of hers and and her sister's that had worn out in the knees but were still good in other parts. She turned the elasticated waist of the pants into the top section of the dress, which makes it easy to pull on and off. I helped her with the tricky bits, but we worked together to design the pattern and L sewed the hems.

I also made the little couch and cushion that the dolls are sitting on this week. I used a flexible polystyrene for the inside of the couch. It was already formed to the right shape, so I just covered it with some fabric I rescued from old pajama bottoms of mine. The little white and pink mat sitting in front of the couch is one I sewed years ago, when we still lived in Wellington.

Paul and I made use of another Entertainment Guide voucher this week to get two bento bowls for the price of one. We had a gap between doctor's appointments in Newmarket, so went to Two Double Seven for lunch.

I've been using the dryer a bit this week, since the weather has been so inconsistent. My friend told me she read a Consumer Magazine article about dryers, and apparently they only cost 50 cents a load to run, which is a lot less than I thought they did. Now I don't feel so bad about the occasional dryer use.

I had another catch up with Di on Radio Rhema this week. We talked about the $70 menu plans I've been creating. It's always fun catching up with Di. She's so easy to talk to (I guess you'd expect that since she's a radio host) that I don't get nervous at all. My voice was a bit croaky though. It has been for several weeks, so I took myself to my doctor yesterday and she suspects I've developed nodules on my vocal chords. She's referred me to an ENT specialist, but while I wait for that appointment, I'm under strict instructions to rest my voice. I'm to keep talking to a minimun and I'm not allowed to sing. No singing! Sob. I guess I won't be doing any more radio interviews for a while, either.

I think that's all my frugal news this week. Now it's your turn to share your frugal successes, either in the comments below or on Craving Fresh's Facebook page.
Emma at 10:26 AM

Thank you for visiting Craving Fresh, and for taking the time to comment. Your feedback is so important to me.